A record number of families from all over the North Shore region huddled beneath blankets with small children along the sides of Oka Road in Deux-Montagnes on Sunday Dec. 1 as the city played host for its 50th annual Santa Claus Parade.

“There must be 10,000-15,000 people here today for sure,” said Deux-Montagnes city councillor Michel Mendes who rode on a float in the parade with Mayor Denis Martin and the five other council members.

For some, the Deux-Montagnes Santa Claus Parade is one of two annual opportunities to return home, often over great distances, for a reunion with family and friends. (The other is Canada Day on July 1.)

It was a cold one

As such, former Deux-Montagnes resident Sandra Tremblay came all the way from Florida to be with her mother, Shirley Tremblay, so that both could take in the Santa Claus Parade from the corner of Oka Rd. and Eighth Ave.

With all the time she’s been in Florida, however, Sandra forgot one thing: Canada gets cold during the winter. While her mother was dressed in a sensible winter coat, Sandra shivered to the end in a relatively light albeit festive red top with humorous season’s greetings printed across it.

The origin of Deux-Montagnes’ Santa Claus Parade can be traced back to the late 1960s. In 1969, Eaton’s department in downtown Montreal ceased the presentation of its traditional Santa Clause parade, thus depriving thousands of children of a spectacle that had been enjoyed by many generations. However, volunteers from Deux-Montagnes took on the challenge of giving back the magic of Christmas to children. The first Deux-Montagnes Santa Claus Parade was held in December 1970. 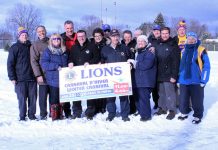 Get out and play at Olympia Park on Sat. Jan. 25 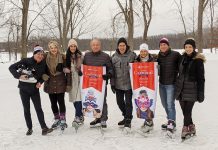 Not everyone’s a fan of winter car shelters in Rosemère