With last spring’s flooding fresh in the minds of many Montreal North Shore residents, Canada’s Infrastructure Minister was in the area last week to announce nearly $50 million in assistance to reinforce flood protection measures in key North Shore municipalities.

“The catastrophic events of recent years are unfortunately still fresh in people’s mind,” the Infrastructure Ministry said in a statement. “With this investment, the government is showing its commitment to helping the victims and protecting communities from the impacts of such events so they can continue to grow and prosper.”

Two of the projects involve the construction, rehabilitation and expansion of dikes and other water-related infrastructure in the Lac des Deux-Montagnes and Rivière-des-Mille-Îles sectors to reinforce water storage, drinking water, sewer and stormwater systems.

Following the dike failure in Sainte-Marthe-sur-le-Lac in spring 2019, a third project involves rehabilitating, improving and building up an essential five-kilometre structure in Sainte-Marthe to a height of 26.5 metres before spring 2020 to address the current vulnerabilities and protect residents for decades to come.

Once completed, the projects are expected to benefit 31,400 people. According to the ministry, they will reduce local economic losses, the number of residents left without essential services and the number of people directly affected when flooding occurs.

The government said it is investing nearly $49.2 million in the projects through the Disaster Mitigation and Adaptation Fund. The municipalities involved in the various projects are also contributing to the projects. They will provide a total of $24,595,400.

“Last spring’s floods had devastating consequences for many residents of municipalities in the area,” said Champagne. “I am wholeheartedly behind those affected by these events and am still feeling the unfortunate consequences. It is therefore essential to invest now so we can be prepared in advance. This is why our government is listening and answering the call so that we are better equipped to deal with the damage caused by future floods. Together, let’s continue working with determination to protect our families and our communities.”

“After the spring events of 2017 and 2019, it was essential to act to prevent the waters from rising again,” said Lapointe. “I am relieved for the people in my riding and the surrounding cities as it’s the safety and well-being of our citizens that counts.

“Irreproachable work has been done both by the City of Deux-Montagnes and the federal and provincial governments,” she continued. “I want underscore the responsiveness of the government of Canada in meeting the urgent needs of the people affected. Natural catastrophes should not be taken lightly and it is by working together that we can achieve great things and build a stronger community.”

“The significant floods we have experienced in recent years have had a profound impact on our infrastructure and affected populations,” said Andrée Laforest, Minister of Municipal Affairs and Housing in the provincial government.

“It is through collaborative efforts like this one with the elected officials of the Lower Laurentians that we are delivering infrastructure that is helping make Quebec more resilient to the effects of climate change on our land.

“The Government of Quebec has committed to covering 40 per cent of the eligible costs for the Sainte-Marthe-sur-le Lac dam project, as well as for those of Deux-Montagnes and Pointe-Calumet. It is a priority for us that this work be carried out as soon as possible to ensure the safety of the citizens concerned and their property.”

“I am pleased to hear that the federal government is providing funding to the City of Deux-Montagnes, and the municipalities of Oka, Pointe-Calumet and Saint-Joseph-du-Lac, as well as cities of Saint-Eustache, Boisbriand and Rosemère,” said Deux-Montagnes mayor Denis Martin.

“This funding will undoubtedly help the cities linked to these projects become more resilient to natural disasters. Deux-Montagnes is proud to have been the instigator and coordinator of this funding application grouping several projects together that will get significant amounts for the benefit of the surrounding communities.”

“When I heard this reassuring excellent news, I immediately thought of the victims of last April 27,” said Sainte-Marthe mayor Sonia Paulus. “I know the degree to which so many among them are attached to their communities and want to stay there.

“This dike, to be built to the highest standards and validated by the most respected experts in the field in Quebec, will help better protect them and reinforce their sense of security,” Paulus continued. “I would like to warmly thank Minister Champagne. Very soon after the disaster he clearly affirmed that he would help us. The Government of Canada’s support is both generous and highly valued.”

According to the federal government, funding for the projects is conditional on Canada being satisfied that the legal duty to consult is met. The Disaster Mitigation and Adaptation Fund (DMAF) is a $2-billion 10-year program to help communities build the infrastructure they need to better withstand natural hazards such as floods, wildfires, earthquakes and droughts. 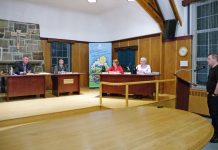 Kory - June 28, 2019
0
From left to right: Denis Martin, Mayor of City of Deux-Montagnes and Prefect of MRC Deux-Montagnes, Patrick Denis, Director of ...